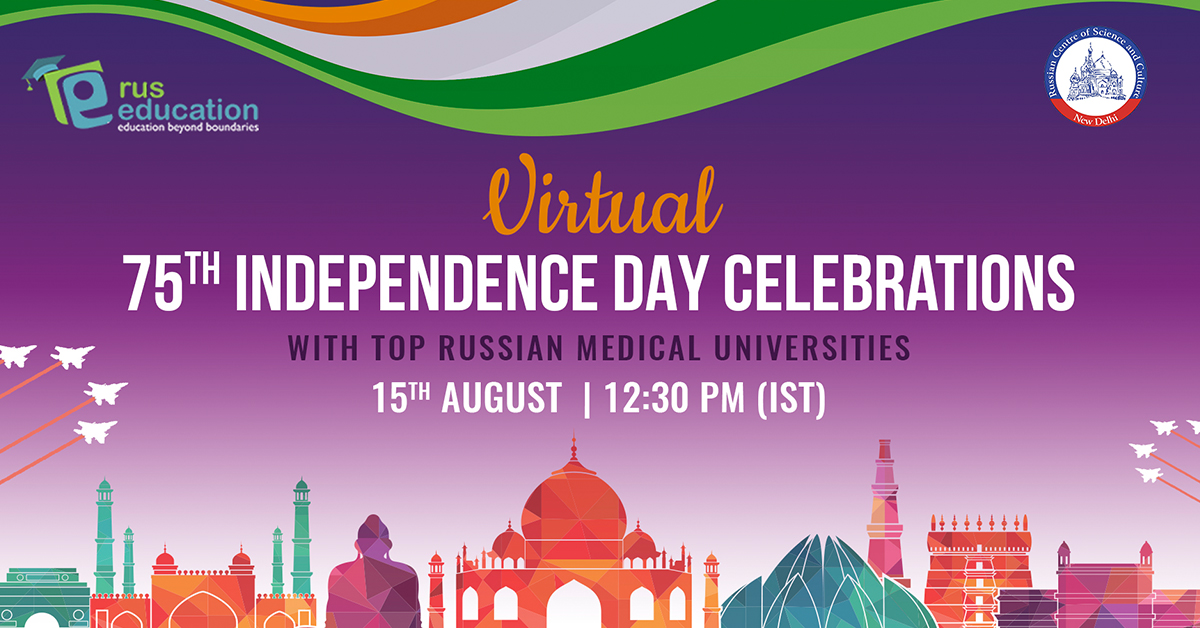 For every Indian, 15th August is the most important day of the year. In 2021, this day marks the 75th anniversary of Indian Independence. On this occasion of the 75th Indian Independence Day, the team of Rus Education had organized a grand event in collaboration with the top medical universities of Russia like Mari State University, Perm State Medical University, and Tver State Medical University.

Indian students currently studying in Russia celebrated Indian Independence Day in their respective universities. The celebration included recitation of prose and poems, singing acoustics, dancing on the peppy tunes of patriotic songs, and more. The entire celebrations from these universities were broadcasted live by Rus Education. Many students and parents from India joined this event virtually to take part in it.

The celebration started with the National Anthem of India as well as Russia to honor the age-old friendship between both countries. It was followed by the address by the Vice-Chairman of Rus Education, Air Marshal Dr. Pawan Kapoor (Retd.), and Ms. Elena Barman, Director of the Cultural Department, Russian House in New Delhi.

After the initial addresses, the students of Mari State University took over the event with their marvelous performances. The performance started with the traditional dance on Ganesh Stuti followed by the acoustic singing of many patriotic songs and dance performances.

After Mari State University, the students of Perm State Medical University also performed on the occasion with effervescent speeches, recitations, dance, songs, etc conveying their feelings of patriotism towards their home-land.

The final performances were by the students of Orenburg State Medical University, filled with extreme enthusiasm. The students concluded the cultural program of this occasion with immense patriotism and also shared some of the historical facts in regards to the story of Independence.

After the students, the team of Rus Education further arranged the special performances on this grand occasion. This was soon followed by the grand reveal of 4 big surprises for all the students recently enrolled or studying for their MBBS in Russia. This included the announcements for the NEET coachings, NEET Guidance Seminars exclusively for the students who would be appearing in the NEET-UG 2021.

The reveal also included the announcement of the Russian Language Foundation course for the new students as well as the students studying MBBS in Russia. The 3month course would be aiming to prepare the students for their comfortable living in the new country.

The last announcement was of the FMGE Coaching from the 4th year onwards in collaboration with the Universities curriculum, The coaching would feature the latest exam pattern, interaction with the subject matter experts, and pass-out students as well.

Dr. Dinesh Singla, Director, Rus Education, ended the celebration with a vote of thanks for all the participants, chief guests, and attendees. The event culminated in the Independence Day Celebrations on a high note.