Jharkhand short of 22,500 Doctor as per MCI study 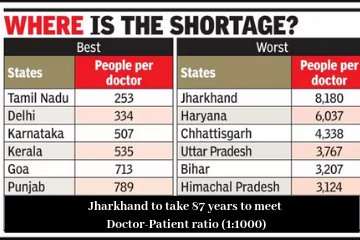 As per the recent study conducted by MCI, looking at the current production rate of doctors in Jharkhand i.e. 300 doctors annually, the state will take a minimum of 87 years to meet the doctor-patient ratio of 1:1000 as set by the World Health Organization (WHO).

Currently, the state has about 10,000 doctors with a population of 3.25 crore. The approximate shortfall of doctors in the State is more than 22,500. Lack of planning and low budgetary allocations have led is the major reason for such a poor state of healthcare in Jharkhand as informed by one of the medical professionals.

Good News! The Cabinet has approved setting up of 75 Govt. medical colleges!