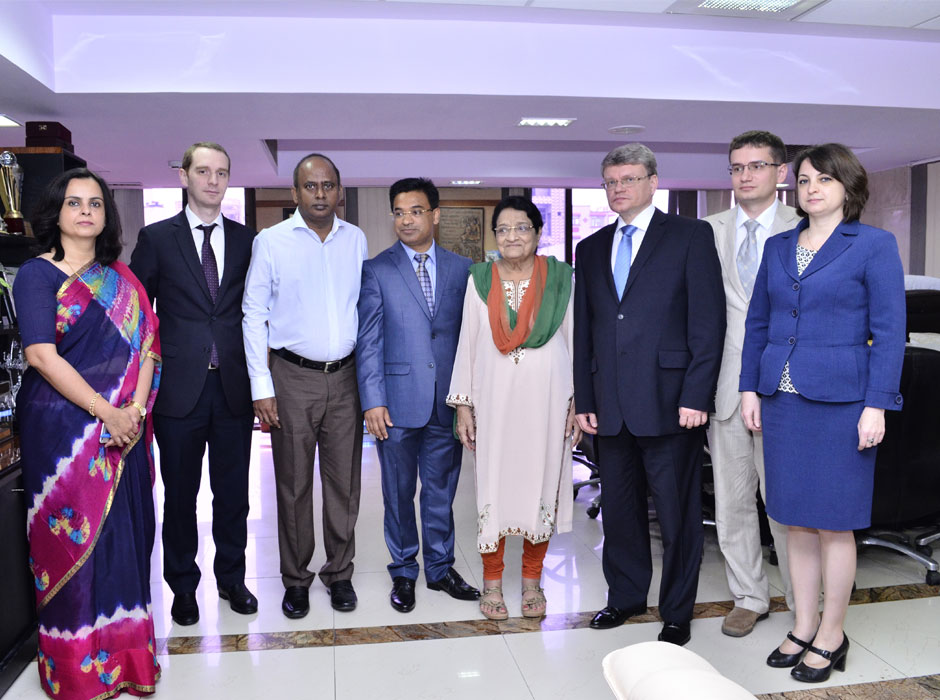 RUS Education organized a visit of High-Level Delegation from one of the top medical universities of Russia, Kazan State Medical University to India in the month of March. The Delegation was led by Dr. Alexey Sozinov, Chancellor, Kazan State Medical University Russia, Dr. Elena Koshpaeva, Dean for Foreign students KSMU and Dr. Timur Akhmetov, Deputy Dean for Foreign students KSMU. The Delegation was received at IGI International Airport by the officials of Rus Education.

The agenda of the meeting was to discuss the following matters:

1. How the eligibility criteria of admission of Indian students for MBBS in Russia is different from Russian students in top Medical Universities of Russia.

3. Discussion on the curriculum followed for MBBS in Russia and how it differs from India.

4. Subjects that need to be focused more on Indian students doing MBBS in Russia.

Dr. Alexey Sozinov also invited senior officials of the Medical Council of India to visit Russia and understand the education system in Russia.

Another meeting was organized by Rus Education between the High-Level Delegation of Kazan State Medical University, Russia with the Higher officials of All India Institute of Medical Sciences, New Delhi, and RML Hospital, New Delhi.

The agenda of this meeting was to discuss the following:

1. Possibilities to organize summer practice for students of MBBS in Russia in top Medical Universities of Russia during summer vacations in India.

2. Information about the available departments for clinical practice for students.

3. Supervision and control of summer practice for Indian students under the head of department or Professors of University, in coordination with Kazan State Medical University.

4. Information about the practical skills that can be taught in hospitals during the summer practice session for Indian students of KSMU.

5. Possibilities to send a limited number of Russian students (4-5th courses, 1-2 students per hospital) to have summer practice in Indian hospitals.

The Delegation received an overwhelming response from both the hospitals. Rus Education was proud to know that many Indian graduates who completed MBBS in Russia in top medical universities of Russia were working on senior positions in different super specialties in All India Institute of Medical Sciences and Ram Manohar Lohia Hospital. It has been assumed that soon the memorandum of understanding (MOU) will be signed between Kazan State Medical University and AIIMS and RML hospital.

During the press conference, the media was addressed about the meetings with higher authorities of the Medical Council of India (MCI), All India Institute of Medical Sciences (AIIMS), Dr.Ram Manohar Lohia Hospital (RML).

RCSC announced the scholarship seats for Indian Nationals in top universities of Russia.

At this event, the parents of students studying MBBS in Russia in various top medical universities of Russia acknowledged the efforts of Rus Education staff for providing excellent support to the students in Russia.

The delegation from KSMU departed for Kazan on a high note. The Chancellor appreciated the efforts of Rus Education in organizing the visit and various meetings which in the future are expected to take ratings of KSMU to new heights