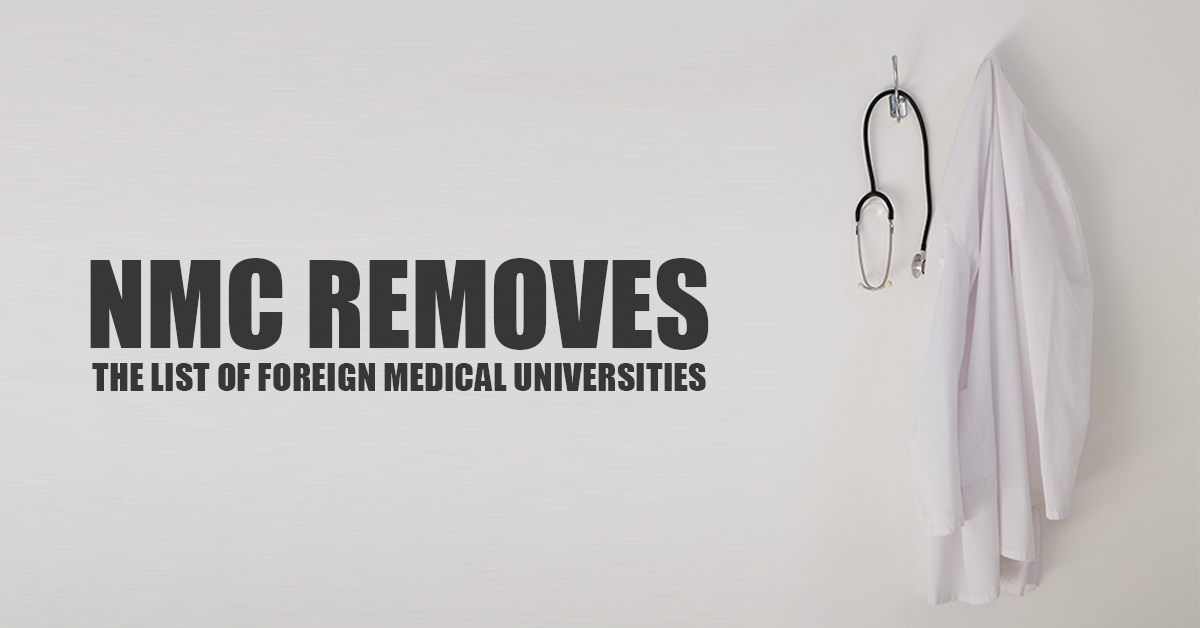 Earlier, NMC had a list of foreign medical institutes from where Indian medical students could pursue their higher studies and give the screening test to practice medicine in India. But now, it has withdrawn the list allowing students to pursue their medical education from any institute abroad without any barrier though they have to go through the same screening test to practice their profession in India.

In the words of NMC :

“It is to be noted that the erstwhile Medical Council of India had provided a list of foreign Medical Institutions/Universities for MBBS or equivalent courses based upon the information received from the Indian Embassy/High Commission of India concerned.

However, it is to state that the 2018 notification to the Screening Test Regulations clearly states that all Indian Citizens/Overseas Citizen of India who has obtained a primary medical qualification from any Medical Institution outside India have to qualify for the prescribed Screening test for purposes of obtaining registration in India in addition to fulfilling other eligibility criteria stated in the regulations.

It is to clarify that the National Medical Commission does not endorse any list of Foreign Medical Institutions/ Universities for MBBS or equivalent courses.

The public at large is advised that before taking admission in MBBS or its equivalent course in a university outside India, confirmation of the fee structure, details of the course, etc. should be directly obtained from the University/Institution concerned.”

Unbolting the doors to all the international medical Universities is a big sigh of relief for students. It would bring in a wide spectrum of foreign medical universities to Indian med-student’s reach and would open enormous international opportunities for them.

Studying abroad can be a life-changing experience for students. From enhancing their global network to experiencing a new culture, the benefits to their career and to the knowledge pool of the country, in general, are immense.

The benefits of international experience are widely applicable across disciplines. By studying abroad, they’ll have the opportunity to hone their language skills. While studying a language in class is rewarding, applying it to the real world is an entirely different experience. Adapting to different styles of teaching will also help them adjust to different management styles, making them more versatile in their workplace.

As they study abroad in a foreign country, they’ll get to meet fellow students who are also from different countries, backgrounds and ethnicity. They’ll get international exposure and moreover, they will bring this knowledge and skills to our country.

Also, this decision would result in a vigorous bout of competition between the Indian private medical universities and the foreign medical institutions.

Hallowed portals of learning would be thrown open to foreign universities. Private Universities would be facing direct competition from international institutions and would be spurred to lower their fees structure and increase their quality of education.

This news during India’s poised recovery from the covid-era brings in new lights of hope for medical students. Students can now study medicine abroad without any barrier and come back to India after passing.

It would expand market competition in higher medical education and force the Indian private medical Universities to bring down their exorbitantly high prices to normalcy. Hopefully, we would see a fascinating rivalry between India’s top med-schools and the world’s top med schools. One thing can be stated for sure, there would be an array of opportunities for Indian medical students in the upcoming future.