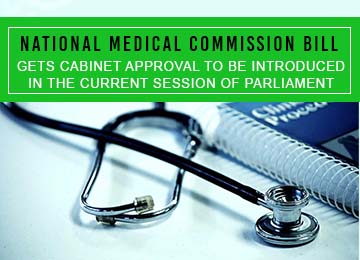 NEET Counselling sessions for admissions to Medical Universities are going on in the country, and medical aspirants of the nation are tirelessly running to win the race of getting MBBS admission in an Indian Medical University!

On Wednesday, July 17th, 2019, the Union Cabinet gave the nod to the National Medical Council (NMC) Bill which was supposed to replace the Medical Council of India (MCI) leading to a great change in the country’s medical education sector. The Bill will be introduced again in the current session of parliament. It was primarily introduced in Parliament in December 2017 but was lapsed with the dissolution of the 16th Lok Sabha.

As declared by the official sources, according to the NMC Bill, the final year of MBBS Exam will be known as National Exit Test (NEXT), to seek admission in the post-graduate medical courses and to get the license to practice medical career in India. This Exam will also act as a screening test for Foreign Medical Graduates.

Apart from this, NEET and NEXT will apply to national institutes such as AIIMS to attain a common standard in the medical education sector in the country.

As per the Bill, National Medical Commission (NMC) will be set up in place of MCI for the development and regulation of all aspects of medical education, profession and institutions.

As informed by the sources, the National Medical Commission will responsible for the regulation of fees and all the other charges for 50 percent medical seats available in private and deemed medical universities.

The bill also allows to set up a Medical Advisory Council to provide advise and offer recommendations to the panel.

According to the bill, the Medical Assessment and Rating Board (MARB) will be the regulating body which will be responsible for assessing medical colleges and thus will develop a ranking system which will help students to choose medical institution in a much-informed manner.

4800 MBBS Seats out of 75000 are reserved for Economically Weaker Students!