Good News! To cut the shortage of Doctors, government added around 10,500 MBBS Seats this year! 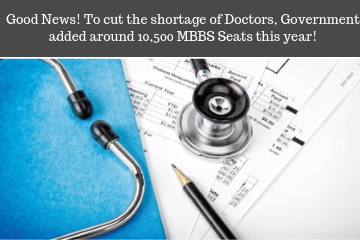 To cut down the shortage of Doctors in the country, the government has increased MBBS Seats by more than 26% over the last two years, taking the total number of MBBS Seats to around 75000. Apart from this, about 8900 medical seats have been added to PG medical courses to maintain the number of specialists.

Adding further, over 4,800 MBBS Seats have been reserved for students who are coming from economically

As of March 2019, there is about 11.60 lakh registered Allopathy doctors in the country, resulting in a doctor-population ratio of 1:1456 as per the current population which is around 1.35 billion.

The union health minister also informed the audience that 82 new colleges are being established by upgrading district or referral hospitals preferably in under-served districts.