Exemption for NEET Not Registered Candidates 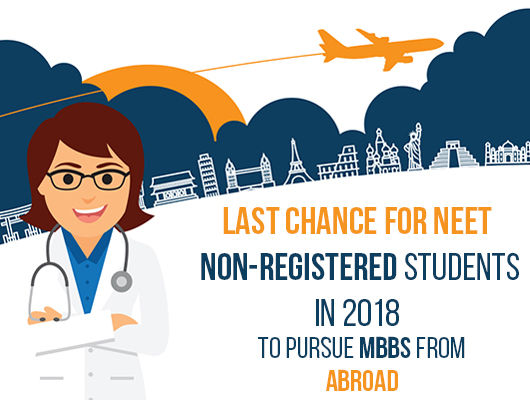 On March 8th, NEET was made mandatory for students wishing to go for MBBS abroad. Not just this, the students had to secure a minimum of 50 percentile to be able to qualify for admission in MBBS in foreign universities.

Many of the students who could not register for NEET 2018 then filed a petition in the High Court to be exempted from this condition of NEET being compulsory for MBBS in abroad.

In response to the petition, the Hon. High Court, on 14th September, passed a verdict, following which, the Medical Council of India (MCI) in consultation with the Ministry of Health and Family Welfare granted permission for the academic year 2018-19 to all medical aspirants who want to study abroad and have not registered or appeared for NEET 2018. Meanwhile, the students who had appeared for the National Eligibility Entrance Test (NEET) and could not clear it successfully will not be eligible to move abroad.

The exemption is however permitted on certain grounds which are as follows:

All the above measures are taken by the Medical Council of India to facilitate the students in every possible manner to encourage the students for enrolling in Top Medical Universities and become successful doctors. The scrutiny in the above process will eliminate any wrong-doing with deserving candidates and allow them to make an accomplished career in Medicine.

As per World Health Organization, India lags far behind the International standards and suffers from a highly skewed doctor to patient ratio. Even after lawful commissioning of the medical seats across the nation, India can only produce only 60000 in a year.

Now the exemption made by the MCI will prove to be beneficial to many students who somehow failed to register themselves for NEET. It is however to be noted that this exemption is made for the last time and from next year onwards NEET will be a mandatory examination.

Study MBBS in Russia Without NEET