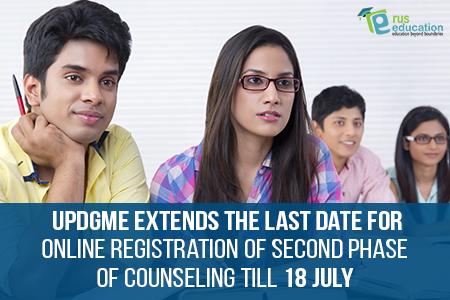 The due date for online registration for NEET second phase of counseling has been extended by the Directorate General of Medical Education, Uttar Pradesh (UPDGME) to 18th July 2018 as per the reports.

The last date was earlier altered to 16th July 2018 which has been further extended to 18th July 2018. The UPDGME has also suspended the documentation process considering the 12th July 2018 notice by the Medical Counseling Committee (MCC).

After the Madras High Court’s order directing CBSE to release a revised rank list, the MCC has suspended the second round of counseling until further notice.

The Madras High Court order directed CBSE to grant 196 grace marks- 4 marks each for 49 questions to all students who appeared for NEET in Tamil Nadu this year. This was in response to a Public Interest Litigation (PIL) filed by Petitioner senior CPM leader T.K. Vijaya Rangarajan who desired full marks for the 49 questions, said keywords in the Tamil question paper were wrongly translated from English. Because of this, there was confusion among the candidates.

On Monday, 16th July 2018, the CBSE moved to the Supreme Court against the Madras High Court order. According to a report, it had been thinking of challenging the apex court’s decision on grounds that the information bulletin of NEET has said that in case of any confusion in terms of translation of any of the questions, the English version shall be treated as final.

Some Medical Students Got Zero or Less in NEET