Annual Meeting of Parents Association of Indian Students in Abroad 2016 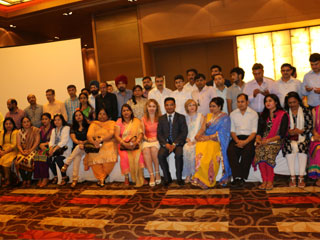 RUS Education in association with the Russian Centre for Science and Culture (Cultural Department of the Russian Embassy) organized the annual meeting of the Parents Association of Indian Students Abroad (PAISA) on April 3rd, 2016 at Hotel Le-Meridian, New Delhi.

The meeting was attended by officials from Russian Centre for Science and Culture, Representatives of Indian Students in various universities of Russia, staff, and Director of Rus Education, pass-outs of various Russian universities who are working in India, and parents of students who are currently doing MBBS in abroad.

While Ms. Tatiyana Perova discussed the new opportunities for students studying MBBS in Russia. She also informed the parents about the new rules of the Ministry of Russia under which students can opt for a part-time job during the course of their study. Ms. Elena Barman assured her full support in assisting the parents and students.

Mr. Syed Imranuzzaman informed the parents about the works of Rus Education since the last annual meeting with parents. He briefed about the visit of a delegation from Russia to the Medical council of India in the month of February regarding the accreditation of Russian postgraduate degrees. He also informed the parents about the signing of MOU of a few Russian universities with major hospitals like AIIMS and Apollo in India, where students will be able to conduct practical training during the tenure of their MBBS course in Russia.

Dr. S. K. Washim informed the parents about the measures taken in Russia for better services to students. He also informed about the Indian mess that was organized in 2 major universities of Russia, in Tver State Medical University and in Orenburg State Medical University. He also emphasized the need for regular follow-up by parents and to keep a check on the students in their academics. He assured full support for parents and students from the University side.

​Dr. Sushant, a pass-out from TSMA, is the founder of “Team Motivation”- an organization of doctors who help Indian students studying MBBS in Russia is preparing for the MCI Screening Test, was also present.

​Rus Education has signed an MOU with Team Motivation following which, MCI coaching will be provided to the students doing MBBS in Russia in top Medical universities in Russia.

​ The pass-out doctors also shared their experiences about their careers after completing their MBBS in Russia. They discussed with parents, the ways to clear MCI exam and how to get jobs after completion of the degree.

Parents of students studying MBBS in abroad appreciated the steps taken by Rus Education in conveying their doubts and suggestions to the Russian Universities. They also conveyed a few more suggestions for Rus Education and for Russian Medical Universities by filling up the feedback forms.

This meeting has been a huge success in improving services for students doing MBBS in Russia both academically and in living conditions. More parents are joining this Association, with RUS Education and RCSC, every year for the improvement in the level of education and facilities in living conditions for the students doing MBBS abroad. A similar meeting was held in Mumbai on April 2nd, 2016, and other meetings are planned in Ahmedabad, Kolkata, and Chennai in the coming weeks.