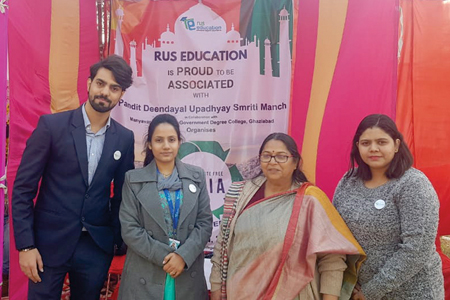 Rus Education participated in a national seminar which was organized at Manyavar Kanshiram Government Degree College, Ghaziabad on ‘Plastic-free India’ on 29th January 2019 from 10:00 a.m. to 5:00 p.m. This was purely dedicated towards the mission of spreading awareness of the perils of plastic and the importance of recycling. Reuse, Reduce and Refuse were the 3R’s promoted there at the seminar.

The team of Rus Education joined the event, as a small contribution towards this national cause. Our experts encouraged students for plastic-free India and counseled them for getting enrolment in medical universities of Russia or abroad. Students filled out our forms for further proceedings.

The event was initiated by the Manyavar Kanshiram Government Degree College, in the name of Pandit Deendayal Upadhyay (RSS thinker and former leader of the political party Bharatiya Jana Sangh, the forerunner of Bharatiya Janata Party). Poster competition for college & school students and Elocution Competition based on plastic waste problems; were the attractions of the event.

Topics selected for the seminar were Rag picker’s welfare & concern, Philosophy of Pandit Deendayal Upadhyay, and Recycle of plastic waste.

The associated people, who played the most significant role in the event, were-

On behalf of this Smriti Manch, We- the team of Rus Education, suggest you ban the use of plastic bags and anything made of it; in spite of that, use reusable/jute/cloth bags for all purposes in the market. Spread the awareness as much as you can, being a citizen of the Nation- INDIA. Fresh air, a Plastic-free world, and the great earth- should be the motto of every citizen on this planet.

FMGE on 28 June 2019 by National Board of Examination!