What’s NEXT for FMGs After The New NMC Draft 2021? 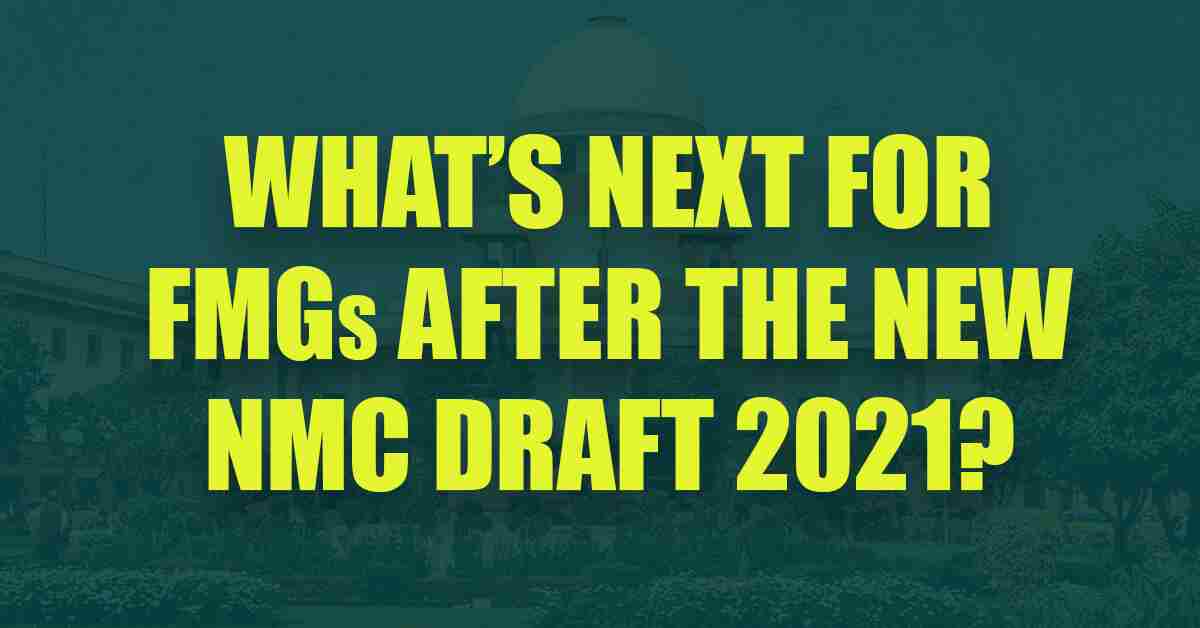 The National Medical Council (NMC), publishing the Draft 2021 in regards to all the Foreign Medical Graduates (FMGs) managed to stir up the discussions on various platforms and has caused a lot of chaos and ruckus among the students who are studying abroad or are planning to do so.

The grandiloquent discussion about the key highlights of NMC new Draft 2021 has been a topic of discussion for quite a while. The main points of these discussions generally revolve upon 3 points.

After the vivid discussions about the shortcomings of Draft 2021, let’s try to understand what the future upholds for the FMGs. But for the future, it is important to understand a few past occurrences.

Unfortunately, NMC, formerly known as the Medical Council of India (MCI), in most cases has made certain decisions that were not in favor of FMGs time and again. Though the perspective for this decision can be understood as to motivate the students to study MBBS in India, the council advertently forgets the limited number of seats in the handful of the medical institutions, the competition of lakhs for a few thousand seats, the expensive medical education in private universities and the lack of choice for specialization are the core reasons for the Indians to study MBBS in abroad. But instead of improving the health training system in the country, the council seems to spend extra hours thinking of ways to marginalize the FMGs.

The distraught FMGs have always knocked on the doors of judicial courtrooms to demand justice. The honorable courts have always understood their concerns and made decisions in favor of them. Here are the few instances where the High courts and Supreme Court favored the plea by the FMGs and medical students aspiring to study abroad over the Council.

For example, the Supreme Court in 2004 had withheld the judgment of the High Court on the number of attempts in the MCI screening test.

Supreme Court in its judgment dated 16th November 2004 in the case of Sanjeev Gupta &Ors. vs. Union of India &Anr. and had directed that there are no restrictions in so far as a number of attempts are concerned in MCI screening test. The decision further established that:

i) “A system of pre-screening of the students desirous of taking admission in the medical institutions in these countries shall be worked out by MCI. This can be introduced from the forthcoming academic year.”

Another meeting on 30th June of the same year recorded the minutes as approved by the Honorable Supreme Court of India had set up the eligibility criteria, exam format, syllabus, etc for the screening test of foreign medical graduates. It was in this meeting which decided that the exam would be administered by the National Board of Examination (NBE) twice a year with no restrictions over the number of attempts.

2. The Supreme Court’s decision for admission at the ‘eleventh hour”

Taking serious note of delay in communication to medical students from foreign countries and the North East regarding admissions to government colleges, the Supreme Court (SC) had directed the Council to inform about the status by August 15 every year, giving them time to join.

The court took into account as the last date for admission in the first year of MBBS courses is August 31, while the Ministry of External Affairs (MEA) has intimated students from Iran, Bhutan, and Nepal about their admissions at the “eleventh hour”, on August 30, as a result, their admissions were denied by the university.

The SC verdict states that the students must be informed about their admission at the university 15 days prior to the last date of admission.

3. Exempting students one-time for MBBS abroad from the NEET Exam in 2020

In a petition filed by a student seeking exemption from NEET (UG) 2020 due to the clash between the date of the exam and the classes in foreign medical institutes in Delhi High Court. The petition was aimed at seeking an exemption from NEET (UG) Exam 2020 as the classes in foreign medical institutes are likely to commence from 15th September. The NEET examination was scheduled for 13th September 2020, thus the student claimed that she would be losing an academic year in the process.

With the NMC/MCI mandating the qualification of NEET (UG) for medical studies in India and abroad, the students for MBBS abroad had to qualify for the exam in order to be eligible and pursue their medical studies.

Understanding the concerns of many such students, the Delhi High Court directed the NMC to grant a one-time exemption from the NEET 2020 Exam for the students seeking admission to MBBS Abroad.

Another example of the Indian Judiciary favoring the FMGS comes with the Honourable Supreme Court of India’s verdict on 30th January 2018, which has quashed Clause 4(3) of the Screening Test Regulations, 2002 of the Medical Council of India (MCI), thus providing relaxation to Indian medical student studying abroad to take transfer migration to other universities/academies/institutions and still be eligible to write the screening test administered by now NMChttps://www.youtube.com/embed/v5irGLYRjTo

Hence, time and again the judiciary has come out to be in the favour of the foreign medical graduates and the students planning to study MBBS Abroad. Therefore, the hope of students wishing to study MBBS abroad or currently studying MBBS Abroad is not all lost even after the NMC Draft 2021 for FMGs. There are various points in the said draft that requires attention and immediate change. One of them falls in the contradiction of the verdict of the Supreme Court and High Court. If the NMC fails to amend the draft, there is a very high chance that many questions would be raised in the courtrooms of the country.

Analyzing the Role of FMGs In The Present Day Crisis

Taking Care of Your Mental and Emotional Health In Pandemic