Stressing on the Distressed Analogy of the Healthcare in India 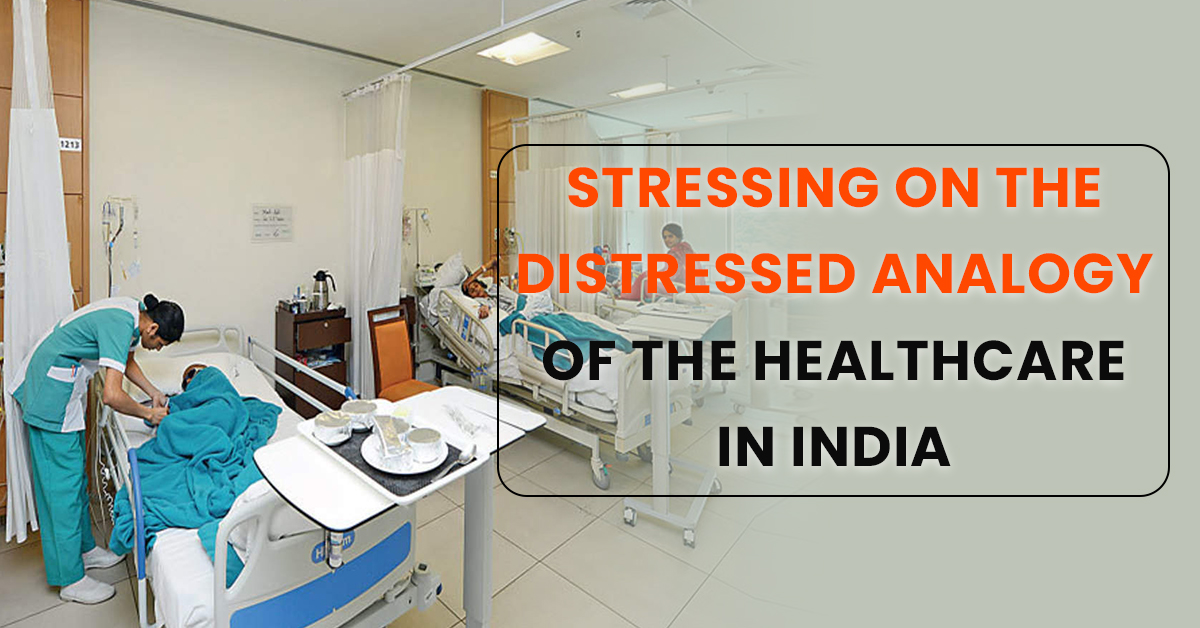 The public health share in the country’s GDP lies about 1.28% with an annual expenditure of about 613 billion in Indian rupees. India’s healthcare sector with worth over 140 billion U.S. dollars as of 2016 was projected to reach up to 372 billion dollars by 2022. These figures had sounded extremely promising a while back.

For almost a year, the healthcare of the country has undergone a major setback due to the pandemic. The sudden onslaught of the second wave of coronavirus has further left the already staggering health facilities to fall onto their knees.

The excessive media coverage about the struggles faced by not only the patients and their family members but also the hospitals has brought this “well-developed” facility under the microscopes of many. Today, we are facing a huge shortage of resources in terms of the reachability of hospitals, ambulances, beds, routine facilities in hospitals, equipment for intensive care, and oxygen. But, apart from these materialistic concerns, which can certainly be overcome by making new alliances and arrangements, there is still a huge gap of the required skilled professionals in the hospitals of the country which needs urgent attention.

Though India is the second most populated country, it is a bit sad situation that we do not have enough hospitals with appropriate resources and even less number of qualified doctors, well-trained nurses, specialists, and technicians. The reason for these limited numbers could be a different topic of discussion on another evening, but today, let’s not just discuss the problem but also try to find its solution.

Recently, the veteran Dr. Devi Prasad Shetty, a cardiac surgeon with over 34 years of experience, a successful entrepreneur with a chain of 21 medical Narayan Health centers in India, a former member of the Medical Council of India, now National Medical Council, was awarded Padma Bhushan, Padma Shri, Karnataka Ratna, CNN-IBN Indian of the Year in Public Service and many other achievements under name has vividly expressed his views on this crisis faced by the society and has suggested some strategies to counter them.

In the article, titled, “The crisis that’s coming: Soon we will run out of skilled personnel to treat Covid. Here’s how to tackle this” Dr. Shetty has highlighted a few worrisome pointers. His statistical analysis states that for every positive patient, among the 3 lakhs, who are being tested positive daily, there will be at least five more patients who are positive but unfortunately not yet tested. Simply implying that at least 15 lakh people are getting infected every day won’t be wrong. If we assume that only 5% of them may need ICU care, we will be adding about 75,000 ICU patients every day, who need to stay in the ICU for about ten days.

Unfortunately, the present health care system supports only 75,000 to 95,000 Intensive Care Units which were already filled before this pandemic started. Though the cases are on inclinations, central as well as state governments have already started taking initiatives to increase the number of material resources, the challenge still lies in arranging the proper care takings.

Dr. Shetty has suggested using the enriched and skill-full resources which the country already has to its full potential by tending and a little bit of mending the standard set of regulations. The government can exempt the standard testing and examinations and allow the candidates to practice at the lower level to assist the doctors and specialists in routine jobs. There are approximately 2.2 lakh recent nursing graduates from GNM or B.Sc Training, 1.3 lakh students waiting for NEET PG Exam who have already graduated and there are 20,000 doctors who graduated from foreign universities and waiting to qualify FMGE to start practicing in the country.

Though these exams are of great importance to providing quality services in the medicinal facilities of the country as the saying goes drastic times call for drastic measures. The government can compensate or reward these students in exchange for providing assistance to the professionals at the time of emergency.

The current covid crisis has revealed the gross deficiency in the healthcare resources of the country, Although the crisis is unprecedented and the government has taken very sincere actions to contain the first stage of the pandemic, the second stage has come as a tsunami and caught us by surprise.

This is not the time to look back and start analyzing what went wrong. This is the time to look ahead and take the right actions. Resources in terms of beds, equipment, medicines, and oxygen can be created and imported, but trained human resources are limited. It is better to have some formally trained resources in this time of crisis than to have no resources at all.

The suggestions of Dr. Shetty may be one of the ways ahead on reducing the brunt of the already burnt-out and fatigued medical and nursing professionals.

All the trainee nurses, postgraduates, and the foreign medical graduates waiting for the examination can be deployed to relieve some of the routine burdens from the shoulders of the specialized manpower who can then focus on the specific care whereas routine care, care of mild to moderately severe patients, teleconsultations and triaging can be done by these professionals

As the discussion of the problem is pretty evident in every medium, digital or non-digital it’s about time we look for a solution. Dr. Shetty’s valuable experience and suggestion could definitely be a way to overcome this obstacle that is imposed by the time on our country.