Qualifying NEET for Medical Seat in India! Why? 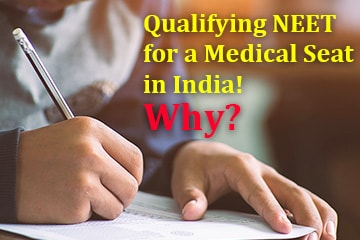 With several things being in the pipeline for change, the one thing that remains constant for medical aspirants for MBBS in India at the moment is the applicability of NEET (National Eligibility cum Entrance Test). Proposed by the Medical Council of India, NEET is a common entrance exam for students willing to pursue MBBS and BDS in the country. The introduction of NEET helped in significantly bringing down the pressure on the students who earlier had to prepare for multiple entrance exams depending upon each state, university, and college. Not only that, but the introduction of NEET also helped the medical education industry in several other ways.

A single common entrance exam for the entire medical education in the country ensures that there is uniformity in the standards set for admission into the medical courses at different universities and colleges across the state. NEET, as of now, does not include Institutes of National Importance like AIIMS and JIPMER. However, with the introduction of the National Medical Commission, INI’s too will be included under the ambit of NEET soon.

Earlier, when one could study MBBS without NEET, a student had to give over eight to nine entrance exams on average to secure a medical seat in one college. That created unnecessary mental pressure on students forcing them to not only appear for different exams, but also prepare for them differently based on their formats, and previous exam paper samples. However, with NEET, that pressure was brought down for the students who now have to only prepare for one common entrance exam for all (minus INI) institutes and colleges.

Giving an entrance exam begins with applying for a seat for the exam which includes purchasing forms, and submitting exam fees. With multiple entrance exams, came the pressure of expenditure on multiple exam forms, which has now been cut down drastically.

Earlier with individual states and colleges having their own entrance exams, there was always a threat and possibility of reservations and blocked seats based on different criteria which substantially reduced the number of seats available for deserving candidates. With NEET being the common entrance exam, it has increased the proportion of equal opportunity by allowing students to be eligible for admission in any state based on their scores and merit.

No Change to Existing Reservations

Many feared that the introduction of NEET would affect the reservations and make it harder for the other categories to secure a medical college seat in India. However ever since its implementation, it has been observed that the seats reserved have remained the same, the only difference being the criteria shifting from Class XII scores to NEET scores.

Earlier, when students could pursue MBBS without NEET, there were several instances reported for scams and seats sold on donations. However, now with the common entrance exam, the number of such instances has reduced drastically thereby making it an opportunity beneficial for students applying for MBBS and BDS courses.

Qualifying NEET requires the student to secure a position in the top 50 percentile which ensures that the deserving students are at the start of the queue for securing their seats in the medical colleges. Moreover, with the implementation of the National Medical Commission, qualifying NEET will also make students eligible for admission to Institutes of National Importance like AIIMS and JIPMER, and for admission to pursue medicine abroad, say, for instance, MBBS in Russia. Thus when one talks of the benefits of qualifying NEET, the above-mentioned points are what come to mind that provide better transparency, admission opportunity, and equality for the medical aspirants.