Guide for International Students to Study in Russia 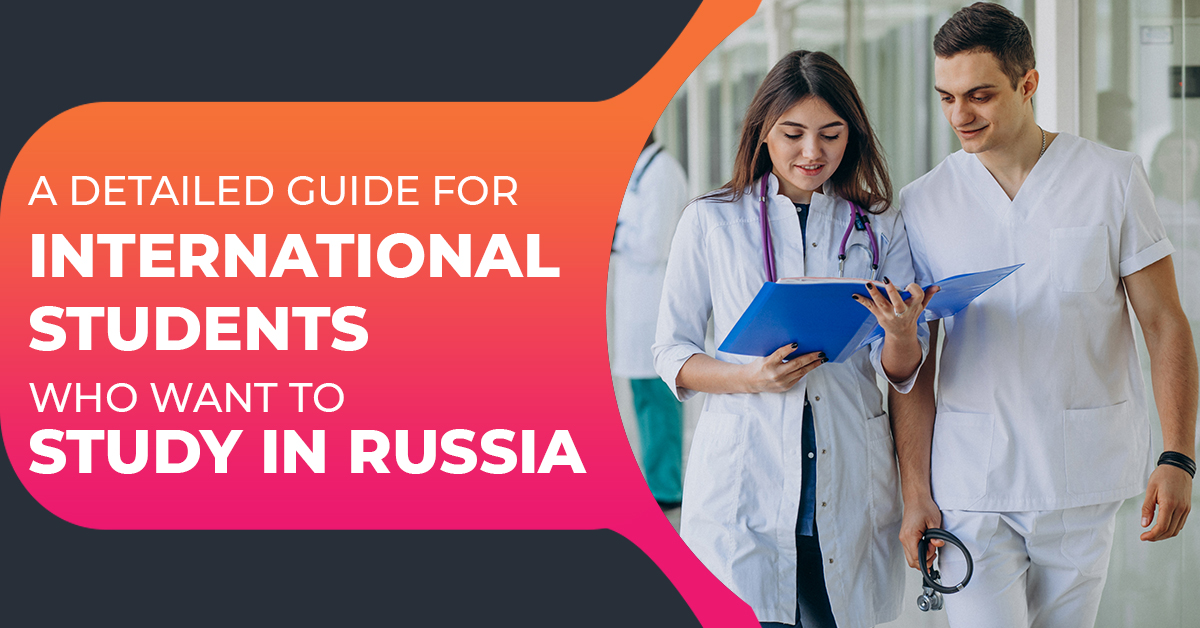 Russia is considered the world leader in training doctors, chemists, physicists, and almost all other natural sciences. It boasts about occupying nearly 30 positions amongst the top 100 ranking Medical Universities, according to the World Health Organization (WHO) ‘s Directory of World Medical Schools. It has some of the finest universities in the world for training students to be future doctors.

The teaching method in the classrooms for MBBS in Russia is efficient and focuses on a way that can help students internalize the course syllabus. The universities also have a very decent student-teacher ratio and state-of-art infrastructure to facilitate the best learning atmosphere. The low-class strength ratio makes sure that students get individual attention and make the most of their time, effort, and financial investments.

This brings us to another issue, the cost-effectiveness of education.

Many students believe that studying abroad will be heavy on their pocket and they won’t be able to afford it.

MBBS in foreign universities is lower than what most private Indian universities charge. And this comes with a ton of benefits that include,

MBBS in Russia is a preferred choice for International students because of the Russian Ministry of Health and Education’s highly subsidized fee compared to other western countries.

Really nothing. You just have to qualify NEET for admission to Russian medical colleges.

Meritorious students with an excellent academic record are given handsome scholarships, with ‘state-funded spots.’

Worldwide Recognition of the Degrees provided by Medical Universities of Russia. The prospect of career opportunities around the globe attracts thousands of students to Russia.

Students who want to take part in research projects can get their hands on international research projects. They also stand a chance to do the kind of medical specialization that they want. Students can also opt for pursuing their MD program once they have done their MBBS.

Once candidates have graduated, they can start their private medical chamber or prepare for

Russian culture has a long and rich cultural history, steeped in literature, ballet, painting, and classical music. About 80% of the population of contemporary Russia are Russians. The remaining 20% are members of more than 180 other nationalities. Despite processes of ethnic assimilation throughout Russian history, many ethnic groups retain their cultural identities.

Cultural diversity in contemporary Russian society is determined by the historically rooted structure of ethnic and cultural space and recent international and interregional migration. Although there is no relationship in Russia between ethnic heterogeneity and regional economic growth and convergence, there is an association between migration-induced diversity and development. Provincial spending on education is inversely related to ethnic heterogeneity. Differences between these results and the results of comparative studies of rich countries are considered.

The best thing about Russia is that there are unlimited places to go and endless things to do. Russia is a clean and beautiful city with panoramic views and colors. Indian Canteen is Available in most of the Universities.

When many people think of Russia, they think of vast tundra growing in frozen forests. That’s not all there is to the country’s geography. There are plains, taigas, steppes, plains, and mountains.

While Russian is the official language, many Russians also speak English as a second language. Medical courses are taught in English and Russian languages. MBBS students also get training to learn the Russian Language because they can communicate with patients in the hospital during medical practice by knowing the Russian language.

There are nearly 5,000 registered religious associations in Russia. According to the Ministry of Foreign Affairs of the Russian Federation, more than half follow the Russian Orthodox Church. Islam is the second-largest religion; about 10 percent to 15 percent of Russians practice Islam.

The most well-known traditional Russian food is borshch. It is full of meat and sautéed vegetables, including cabbage, carrots, onions, and potatoes. It can be served hot or cold and is best served with a dollop of fresh sour cream on top. Vodka is the national drink, knocked back in one gulp and chased with a bite on black bread or salted cucumber. Beer and tea are also widely consumed.

India and Russia have shared a very cordial relationship ever since the cold war. That continues to hold to this time and age.

The embassies are very approachable, and there’s almost a 100% Visa Guarantee to every student that applies for education here.

The wheels of development have made Russia an incredibly different destination than it was in the last ten years. It is opening up new avenues for international students and is racing to embrace a cosmopolitan culture. The stats on how many students opt to study here speak for themselves.

So when are you coming?

Making a choice for Russia as a destination for the MBBS abroad often brings a lot of advantages among the Indian students. The country offers an affordable and easy admission procedure for the MBBS course in top government medical universities of Russia. Along with the quality benefits, the students also get to be associated in a warm and hospitable environment. The Indian students often find themselves comfortable with the local culture of Russia. Studying MBBS in Russia also facilitates the students with various comforts like that of Visa, scholarships, job opportunities, etc.

Want to study MBBS in Russia, contact our student helpline number 1800-833-3338 and get a free personal counseling session!