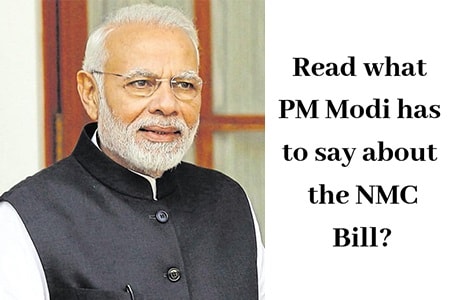 Prime Minister, Shri. Narendra Modi clears the air on the most controversial and debatable National Medical Commission (NMC) Bill by saying that the Bill will do away with the existing corruption in the field of Indian medicine. With the introduction of this new commission, the government aims to create a more transparent medical education system.

The main objective of the NMC Bill is to replace the MCI (Medical Commission of India) with the National Medical Commission which will be the regulating body in all aspects of medical education, profession, and institutions.

But various doctors are opposing the Bill and claiming that the bill will deteriorate medical education and will result in the degradation of healthcare services in the country.

As stated by Prime Minister, Shri. Narendra Modi, when the government was formed in the year 2014, there were many concerns related to the existing medical education system in the country. A parliamentary committee was set up which worked rigorously and did an in-depth study and presented a view of the state of affairs in the sector of medical education. The committee pointed out mismanagement, lack of transparency, arbitrariness, and many more such issues in the prevailing medical education sector of the country.

After coming across so many discrepancies, the government decided to go with National Medical Commission Bill, as the health of our countrymen and the future of our youth is one of the major concerns.

Going further, the Prime Minister also added that the bill has been tabled based on the recommendations of an expert committee. The committee had already studied the system in detail and thus has brought out the problems and improvement areas. The current bill has been amended after the suggestions from the experts.

Going further, PM Modi also shared the benefits of the new NMC bill. He informed the audience that the NMC bill is a far-reaching reform in this space and will correct the prevalent problems existing in the field of medical education. The Bill has multiple reforms that can curb avenues of corruption and can boost transparency.

PM Modi also ensured the audience that at least one medical college will be established between every 3 districts. With increasing awareness about healthcare, rising incomes, and a huge focus on aspirational goals among people.

While concluding, PM Modi announced that the government has a clear & transparent road map that will ultimately lead to an accessible and affordable medical education system in the country resulting in better healthcare outcomes.

Tips for Packing for International Students While Studying Abroad

Mop-Up Rounds End, But You Can Still Be A Doctor! Myths & Facts About MBBS in Russia