Mop-Up Rounds End, But You Can Still Be A Doctor! 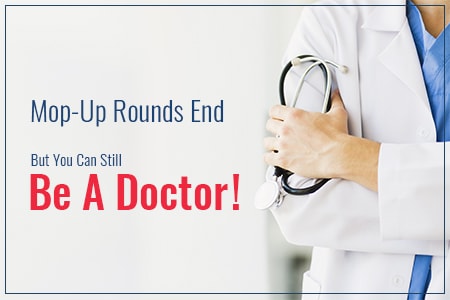 We have arrived at a crucial stage in the process of MBBS admissions. The Final Mop-up round for counseling has concluded with all medical seats in Indian medical colleges getting booked. For those who are unaware of what a NEET Mop-up round is – the Mop-up round is the additional round in the process of admission to an MBBS course in case of vacant seats at Central and Deemed Universities. Every year, there are several seats that are left vacant due to various reasons including students withdrawing their admissions. In such cases, the seats are then filled through Mop-up rounds. This serves as an added opportunity for more students to secure admissions in the same year. However, the biggest problem is that there are still thousands of medical aspirants in the country who are left without a seat in an MBBS course.

But all is Not Lost

While the seats in Indian Central and Deemed Universities may have been booked, it, however, does not mean that all is lost for those who didn’t get through. Students who qualified for the NEET this year, still have a chance to secure a seat in the top government medical universities of Russia.

MBBS in Russia: A Gem for Medical Aspirants

Pursuing MBBS in Russia, thus, comes as a boon for most students as it offers all the benefits of studying at a government medical university, along with other advantages of studying in Russia. Russia is a land of great government medical universities that have been helping students from across the globe, pursue medicine for decades. It not only offers affordable education but also makes it possible for one to get international exposure to patients and the healthcare industry as a whole.

MBBS in Russia has been a preferred choice for thousands of Indian students for years. The small class sizes at the universities ensure that the students get primary attention from the teachers for a better understanding of the course material. The world-class infrastructure at Russian institutions and hostel facilities further enable students to focus on education without a single worry of anything else. Moreover, with the growing diplomatic relations between India and Russia, the latter is also becoming a country with easy adjusting possibilities for Indians.

It goes without saying that studying MBBS at government universities comes with its own bag of perks by not only making education possible but also proving to be a great opportunity for thousands of students to fulfill their dreams.

Pursuing MBBS from government medical universities of Russia is one thing that most medical aspirants dream of getting access to. Here’s why –

All about MBBS in Russia and why it is best?