Thousands of students appear for the MCI Screening test out of which only a few are able to pass the test successfully. What is the reason that even studying abroad does not help the students get through this test in India?

The MCI Test for the students studying abroad has been a hurdle and barrier for them to practice as a doctor in India. Students wish and aim to study abroad for better recognition, following their dreams. But when it comes to returning back to their hometown to practice their profession they face challenges, hurdles, and other problems.

Following are the highlights of the MCI Screening as well as the past results, failures, and difficulties.

What Is The MCI Test All About ?

The MCI screening test is an online test for the students who have completed MBBS degrees from abroad, i.e. is International. For this, the students are required to appear for an online test screening test in which they are expected to qualify for the following in order to practice as doctors in India. The difference here is that students who have studied in India are not required to appear for this test.

The students are well aware of the fact that after having studied MBBS abroad, it is mandatory for them to appear for the MCI test, if they are aiming to practice as doctors in India. But they still choose to study abroad because MBBS there has standardized teaching methods, better educational quality, as well as better technology with more equipment.

Why Is Appearing For The Test Needed ?

Appearing for the test is mandatory for the Indian students who have got their degrees after studying abroad. The exam is run under the National Board of Examinations in India. It is also known as Foreign Medical Graduates Examinations.

The test is not tough to crack but the National Board of Examination ( NBE) shows that 84% of students that studied abroad were unsuccessful in passing the test (in the past 7 years).

This failure of the Indian students also reveals there is a possibility that Indian students lack the required skills to practice as doctors in India. Uniform standards of higher qualifications in medicine are what the MCI aims at establishing. The MCI is mainly conducted to check the basic concepts, application of the concepts, and the ability to manage time.

To practice as a doctor in India, foreign students go through challenges, difficulties, and even more saddening taunts, “ these students do not have the mental capacity to successfully pass the test. ”

Considering the fact that it requires a lot of preparation, it is okay at times to not be able to get through in the first attempt.

There is a difference in the teaching pattern abroad and here in India. It is not the same and this can be a reason why even after studying, students are not able to get through the test. Therefore, this results in poor performance in the MCI Screening / FMGE exam.

Due to the huge differences abroad and in India, it is quite obvious for the students to face challenges moving ahead towards their goals and ambitions.

Due to the huge differences abroad and in India, it is quite obvious for the students to face challenges moving ahead towards their goals and ambitions.

Keeping in mind the failures and performance of Indian students, Russian Education i.e Russian Medical Universities are taking some measures to prevent the students from flunking the test. It would help the students quite a lot if the challenges faced by the students are resolved. Some measures taken by the universities are extra practical classes, special coaching with additional information after the completion of their course. ( Ranks 26th in the whole world )

61,708 foreign MBBS graduates appeared for the examination, out of which only 8764 could make it through successfully. The low scores in the MCI Test become a hurdle for practicing in the country.

This happening continuously may have a negative impact! If students keep failing the MCI Test this way ‘the burden of thousands of patients per doctor is going to increase, for which there would be no solution.’

Top 3 Universities To Consider For Your Medical Study in Russia

MBBS at Orenburg State Medical University and its advantages 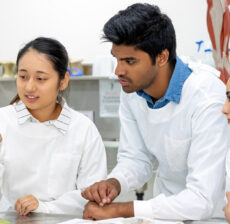